The enchanting Tokyo Cycling Tour on a Cyclo Rickshaw 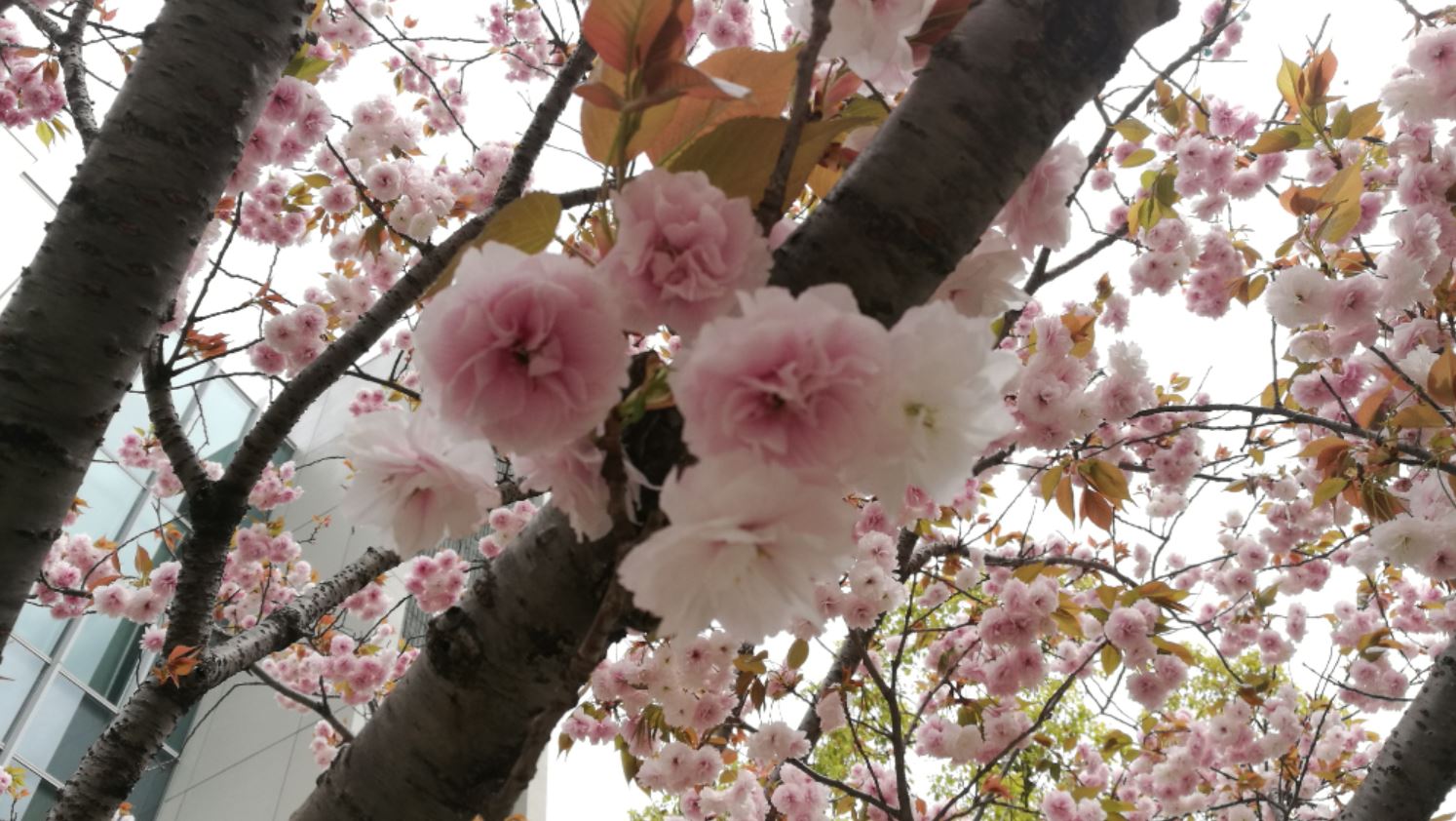 The enchanting Tokyo Cycling Tour on a Cyclo Rickshaw

Tokyo. It’s the dream destination for many Westerners. The capital that combines quirky tech with well-preserved shrines and temples. A metropolis that prides itself on embedding traditional values in today’s fast-paced lifestyle. The story I’m about to tell you is about our recent bike tour around Tokyo.

Landing in Japan during cherry blossom season has allowed Kevin and I to experience something quite extraordinary. I’m referring to seeing sakura trees whilst riding one of the pioneering and rarest transport modes seen in Japan, Cyclo Rickshaw that offers bike tours around Tokyo.

You need to dig deep if you’re looking for a truly exceptional experience that’s not a tourist trap. Since you’re reading it, you can consider yourself lucky to be one of the very few people outside the Japanese online guides as not many English travel guides have got to know about this concept yet.

After reading some of our previous articles from our stays in South East Asia, you are soon going to realise why this form of sightseeing in Tokyo was so appealing and almost instantly felt so special to us. For those who are new to our blog, in a few words, Cyclo bike tour of Tokyo reminded us of the crazy and vibrant day and nightlife in Bangkok, Ho Chi Minh City and Siem Reap, where Tuk Tuks along with the drivers are one of the most iconic and loved by tourists (and locals) forms of transport.

What is a Cyclo?

Hold on, maybe I should start here. The idea of a cyclo comes from Vietnam, where the uniquely designed three-wheeled bicycle taxis started populating the roads in Vietnam during the French colonialism.

Cyclo is a three-wheel bike and as opposed to rickshaws pulled by a person on foot or motor-powered tuk tuks, cycle rickshaw is human powered. Just like in a bike, pedalling allows the movement of a cyclo. These stylish tricycles are not only a mode of transport, some models sport state-of-the-art design that enhance your experience as soon as you are seated.

Whilst the ever popular Tuk Tuks across South and South East Asia are a convenient mode of transport, cyclos are more classy way around tourist destinations.

Riding a Cyclo in Tokyo

Needless to say, for centuries Japan has been known for being a mecca for unique and extraordinary ideas that do not exist elsewhere. Perhaps this is why millions of tourists find Japan a dream location for their holidays, anniversaries and even honeymoons.

Visiting Japan during sakura (or cherry blossom) season has always been my dream and this year I can finally say that my life-long dream has come true.

Cherishing sakura in Tokyo simply wouldn’t be the same without the right companion who, coincidentally, happens to celebrate his birthday in April where sakura trees are covering the whole of Japan, with some petals sweeping the busy streets and rivers along the way. 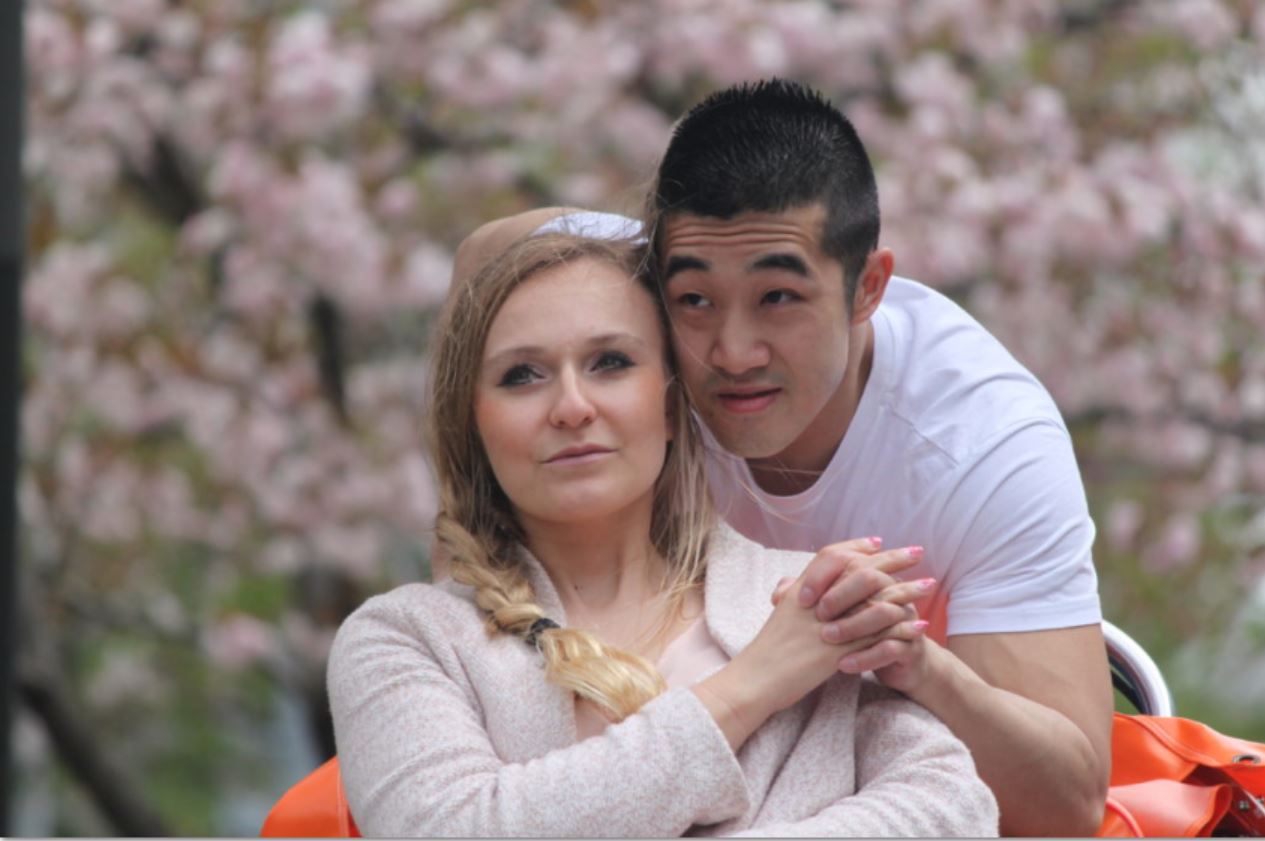 A unique cycle tour in Tokyo that’s designed for couples

Tokyo is easily accessible by bike and well connected public transport. For those who haven’t been yet –  traffic on the roads is also very manageable unlike in other Asian and European countries where the opposite holds true. At first, the idea of riding a bike on the crowded roads of Tokyo seemed bizarre and unthinkable but hey, ‘who dares, wins’. 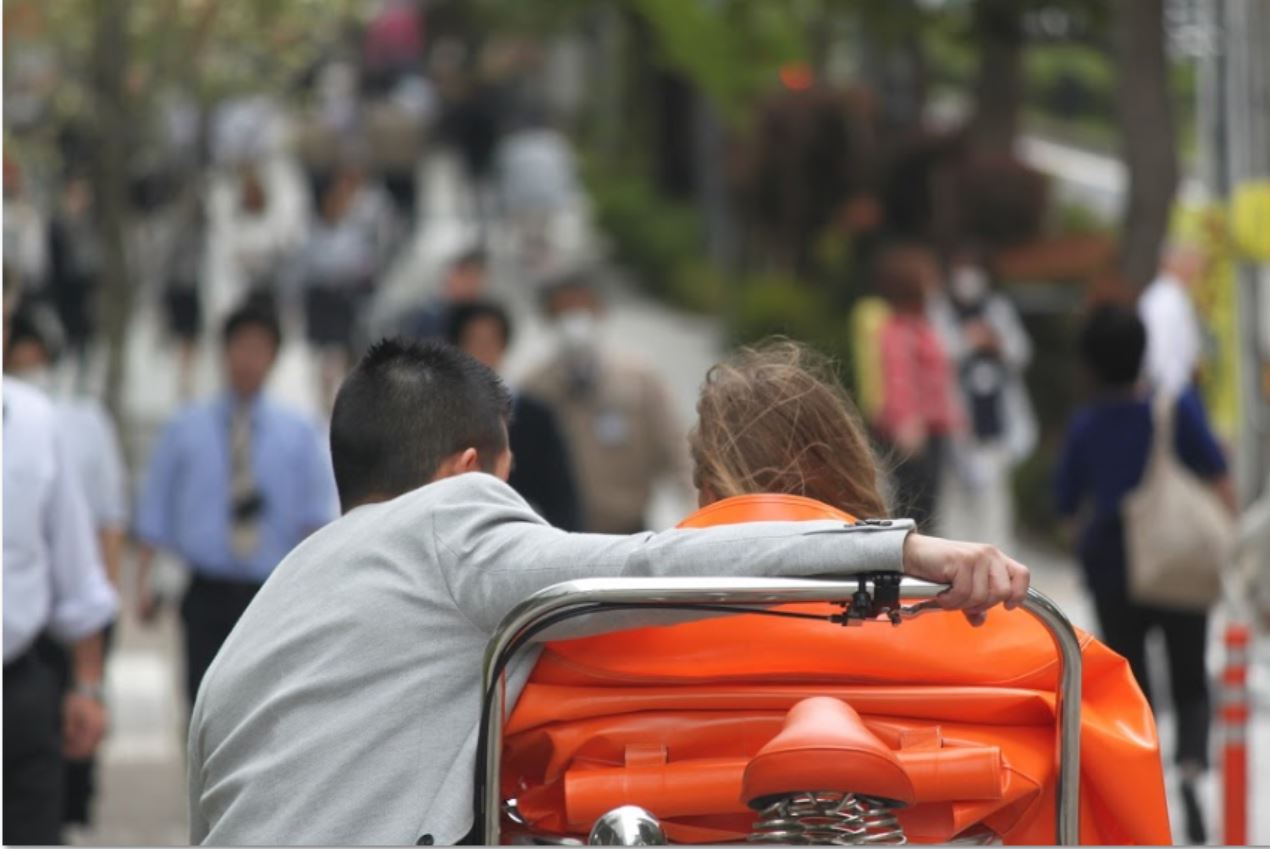 Here’s what the entire concept is about. At Cyclo Limousine, couples are to cherish their closeness and appreciate the journey around Tokyo. There’s one space for a person sitting in the front (that was me) and one for the person who is cycling (and effectively embracing the spirituality of the Japanese saying  Gambatte (‘Do your best’). Whilst it might have felt a little unfair to let Kevin do the (almost) all legwork – literally – since it was his birthday, I also knew how much he enjoys having a challenging workout. I couldn’t be wrong – he got hooked on this idea!

Our meeting point was at Cyclo Limousine’s office near Ginza in Tokyo. Ginza is known for being an area with exclusive boutiques and numerous high quality gourmet dining options. It is here, where the super friendly Mai, the business owner of Cyclo Limousine’s (easier to be found under シクロリムジン) met us with Japanese-style hospitality and made us instantly fall in love with what we were about to experience. 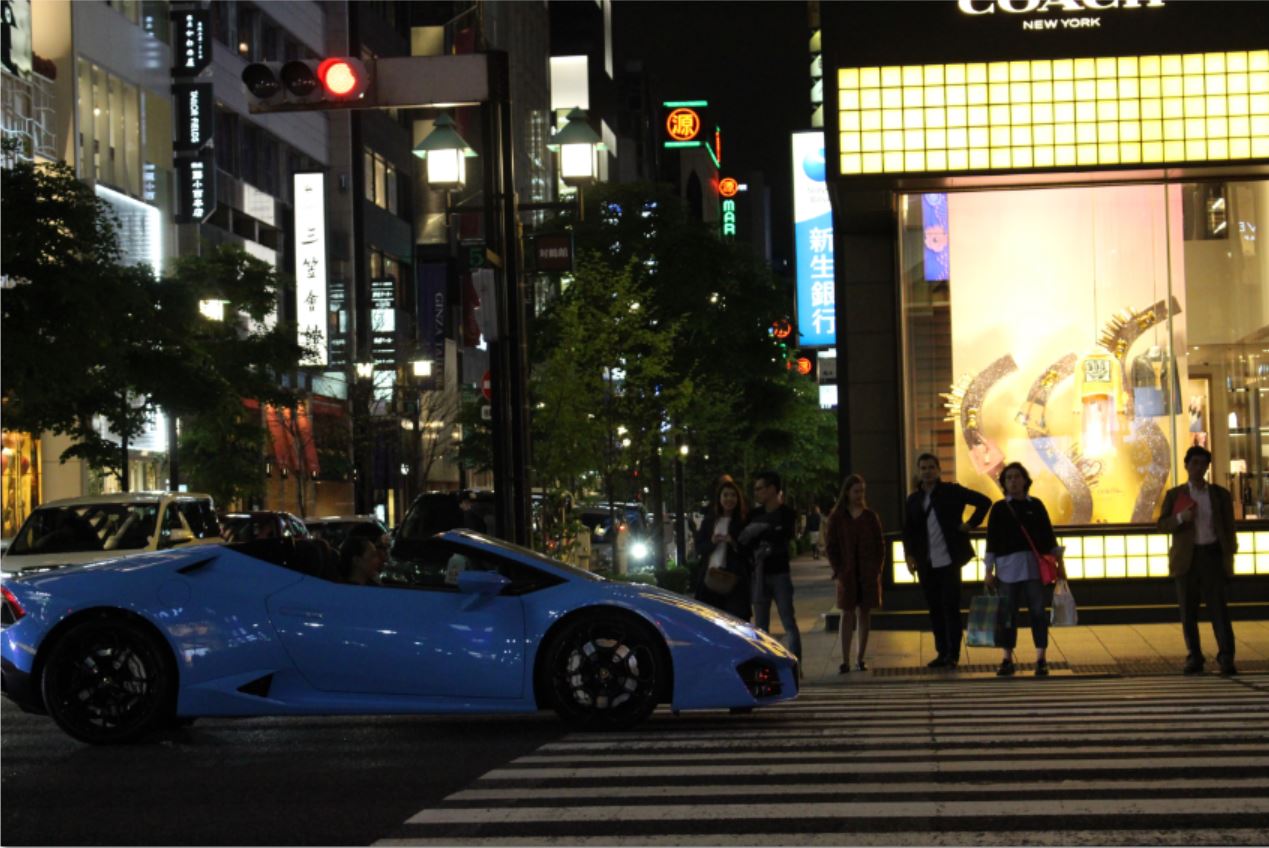 We had a few routes to choose from, with one of them being cycling around the Emperor Palace (more traditional one) or Tsukiji Market – the biggest fish market in the world! However, as we arrived in Japan quite late to experience sakura during cherry blossom, the idea was to capture the very last, spectacular moments of delicate pink flower petals dancing in the wind and above our heads before they eventually disappear into the river. However, after our first experience, we loved the Cyclo so much that we needed to repeat this experience to see Tokyo also at night in Ginza and Shimbashi area. 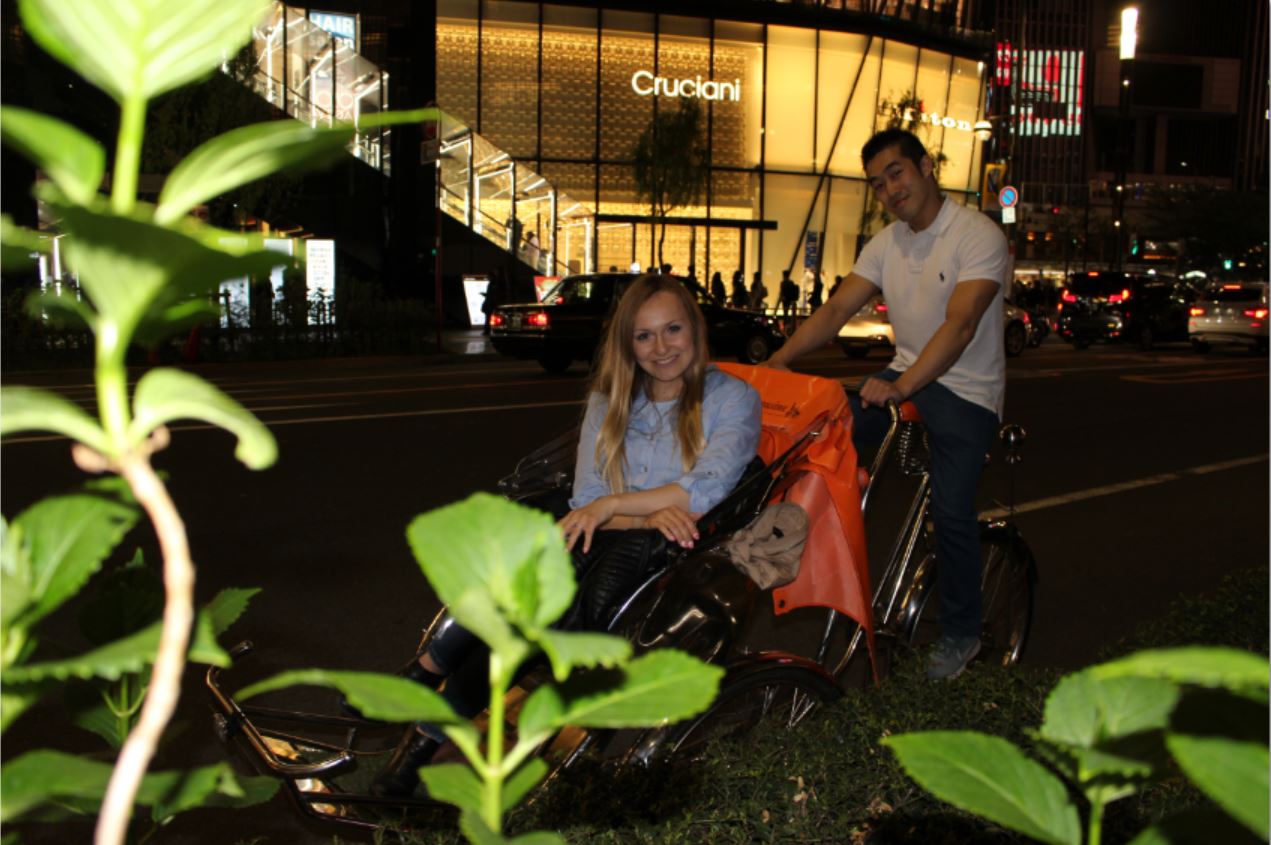 By far, the route which we picked near the Rainbow Bridge and the artificial island of Odaiba was the most difficult one but Kevin decisively took on the challenge. He was on a mission to see the majestic sakura trees. After all, I didn’t give away too much information to him other than ‘We’re going to see sakura for your birthday!’

Despite the windy conditions on that day, we got to experience Tokyo not many get to see. The streets leading up to the Rainbow Bridge were incredibly tranquil despite being a weekday.

Mai from Cyclo Limousine ( シクロリムジン ) managed to bring the best out of us. With her friendly and very personal approach, the ride seemed ultimately enjoyable and brought us even closer.

I feel like I couldn’t have found a better alternative to spend a day out in magical Tokyo for a surprise birthday gift, especially that we only landed a couple of days before and weren’t familiar with Tokyo’s hidden gems yet.

And here I pause to wonder – would Kevin be so thoughtful to find such a romantic and bonding, couply activity for my birthday? For the most of the journey, I felt like I was receiving the ultimate treatment, where he could present not only his masculinity, but also affection that was even more present during the trip. There were also a couple of moments where my strength could shine through too. Nevertheless, the windy conditions made me realise how important is to stay of top of your fitness and apply your work hard ethic to make a smooth move forward! 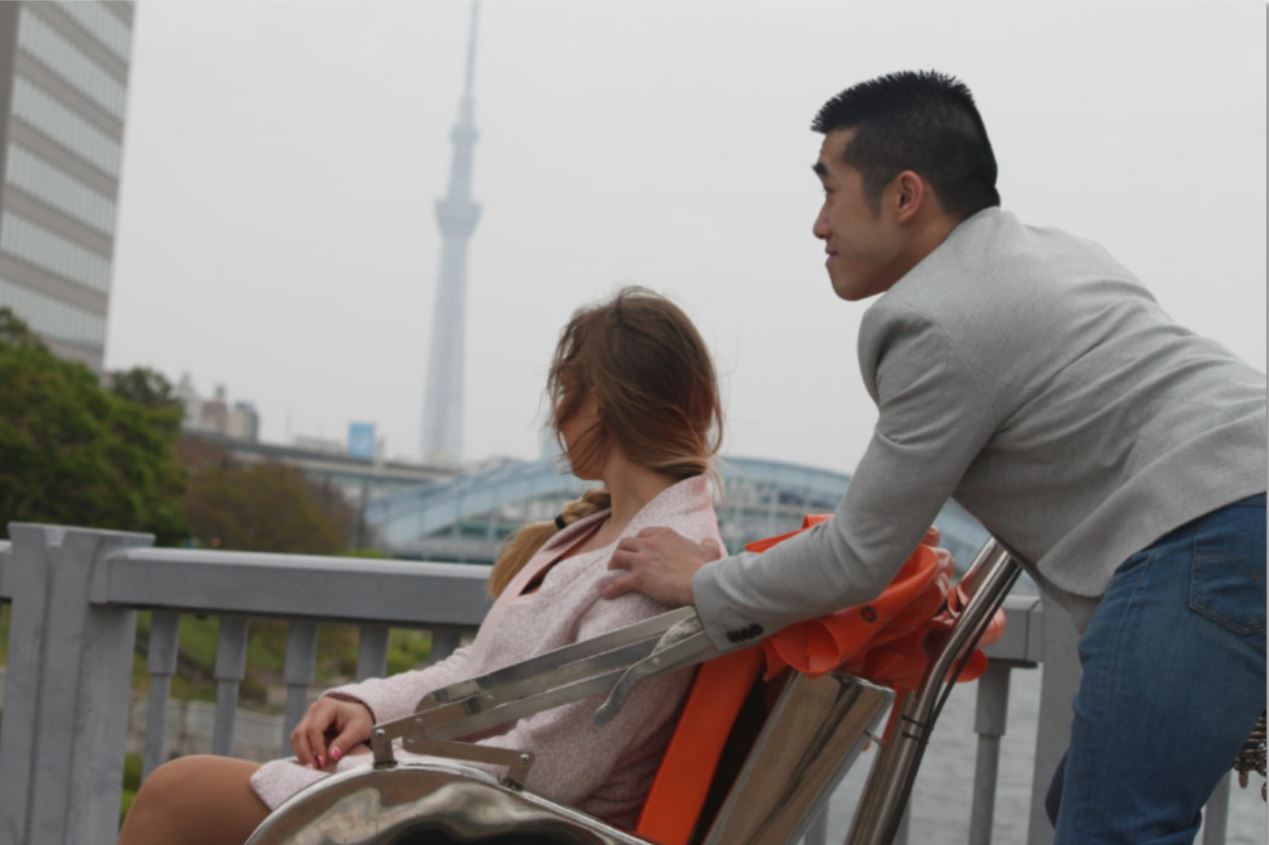 A Meaningful Message that conveys a deeper meaning of your relationship

At Cyclo Limousine ( シクロリムジン ) they really value you as a person. We were requested to provide a meaningful message, a motto that could be conveyed across the album with pictures. Based on this message, it would be easier for the photographer to capture the moments we wanted to see most. I honestly don’t know many places where the customer’s opinion is so appreciated and certainly, Japan once again exceeded our already high expectations! Here’s what our message sounds like:

‘Love comes in many shades – each paints its own little story’

Do you think the magic of this phrase is reflected in the pictures in this post? 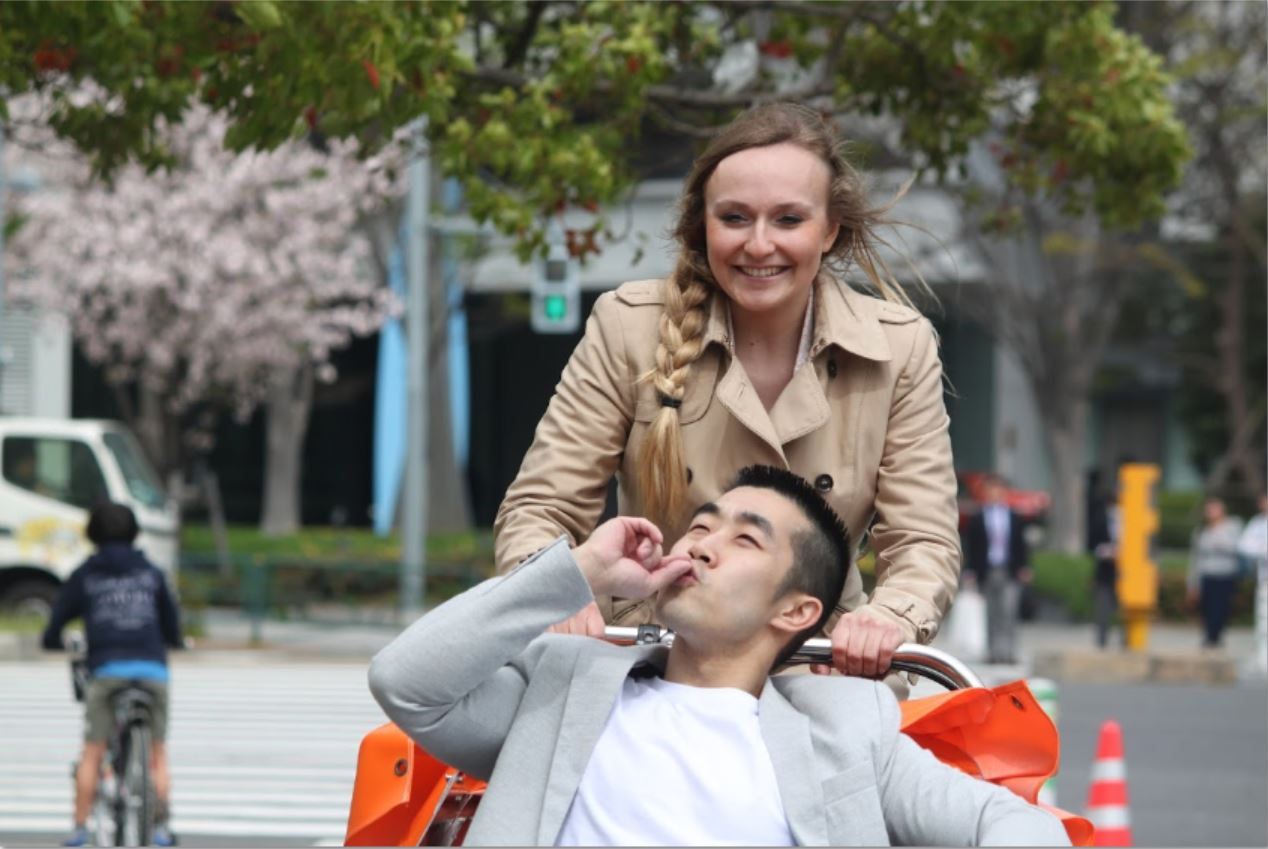 I could tell that Kevin felt accomplished and relieved when we completed our bike tour around modern Tokyo. Accomplished – because we got to see fantastic panoramic views of Tokyo and got some amazing sakura shots of us two. Relieved because we picked a difficult route on a very windy day where no pedaling meant moving backwards! During our birthday treat & sakura cycling tour in Tokyo we not only got to feel the intimacy but also got to have these moments captured on the camera – the professionally taken pictures will follow shortly! Guys, this was an ultimate treat, it’s your moment to shine – ladies would fall for you!

We’re going to post on YouTube our cycling tour from both the photographer and the passenger / cyclist experience so watch this space!

What are we up to?

No images found!
Try some other hashtag or username

Fresh from the oven!